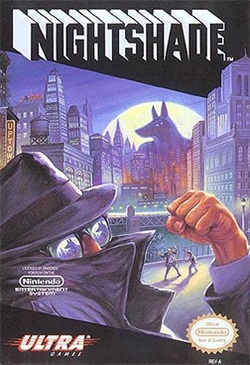 Nightshade's our man!
"Crime feeds upon itself like rats fighting over cheese."
Advertisement:

Nightshade Part 1: The Claws of Sutekh, more commonly known simply as Nightshade, is a game for the NES released in 1991 — the very end of that system's life. It was developed by Beam Software and published by Konami under their Ultra Games label. For plenty of reasons, the game was not successful and faded into obscurity. Yet, in recent years — thanks to internet and particularly The Happy Video Game Nerd and JonTron — it has undergone something of a revival, including being released on Steam in 2019 courtesy of Piko Interactive, with another rerelease on Nintendo Switch the following year.

The game chronicles the rise of wannabe vigilante "Nightshade". Armed only with a Trilby, his fists, and some shades (at night), he's out to clean up his hometown of Metro City, now a crime-ridden cesspool since the death of its former superhero. Nightshade's top priority is tracking down the mastermind who's controlling the gangs, Sutekh.

Very tongue in cheek and only taking itself seriously when necessary, Nightshade combines two very different kinds of game-play: Point-and-click adventure with a (rather unpolished) fighting system. Don't be fooled though, Nightshade is hard. You'll lose, many times, which leads to something original in game design: Your continues play out in the form of comic book-style Death Traps. If you manage to escape, you live to fight another day. This doesn't mean you have infinite continues though; the traps get tricker each time you fail, and after the fourth trap, you'll be placed in an inescapable one if you're defeated once more.

Seeing how obscure this game is, it's no surprise that the franchise never got to Nightshade part 2. Fortunately, it spawned a Spiritual Successor: Beam Software's Shadowrun for the SNES.

trying to explain why this game flopped. Give it a look if you can.

Not to be confused with PS2 game called Nightshade (Kunoichi).