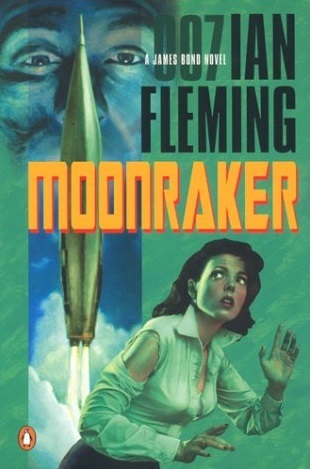 The third James Bond novel by Ian Fleming, published in 1955.

Bond is tasked to teach one Hugo Drax a lesson in a game of Bridge, so he'll stop cheating and avert a possible scandal. Afterwards, he has to investigate strange going-ons in Drax's project to develop a ballistic missile for the British Government.

The novel avoids several features of what would come to be regarded as the typical James Bond adventure. Instead of an exotic foreign location, it's set entirely in the Home Counties of England. The course of Bond's relationship with the main female character also doesn't go as one might expect.

All of which, along with the fact that the plot is built around a technology that was cutting-edge in 1955 but already behind the times when the film franchise started, goes some way toward explaining why the eleventh James Bond film has very little to do with the book, only sharing its title and the Big Bad's name. Some elements from the book would eventually make its way into the seventeenth film in the series, GoldenEye, and others into the twentieth film, Die Another Day.

Not to be confused with James Bond and Moonraker, the novelization of the aforementioned film, written by Christopher Wood.