I Think You Broke Him 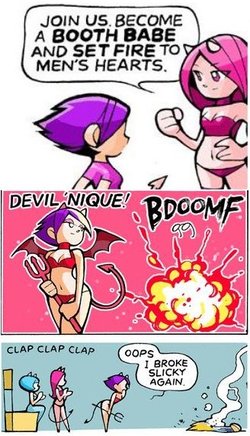 "I think you did a little more than winding. I think you cranked him up."
— Hobbes, Calvin and Hobbes: The Series
Advertisement:

A Stock Phrase. When a character is struck speechless, stunned, going through a Heroic BSoD, or generally unresponsive for whatever reason, another one will tell the responsible "I think you broke him/her." Or someone in the peanut gallery will just comment, "I think X broke Y," or any variation thereof. Most often whispered as an aside.

Frequently used for comedy, but can be part of a dramatic setup too.

The 'curse' of Cerberus finally causes Dylan to snap.

Alternative Title(s): I Think You Broke Her

The 'curse' of Cerberus finally causes Dylan to snap.