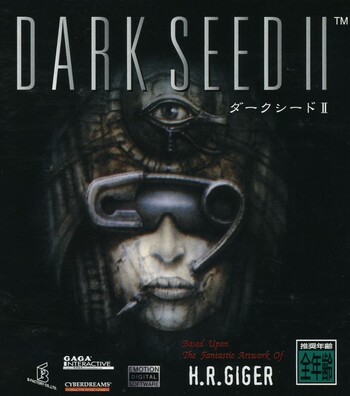 The sequel to Dark Seed, Dark Seed II was released in 1995 and 1996 for Microsoft Windows and the Macintosh, respectively. The game got ports released for Japan via the Sega Saturn and the PlayStation. Unlike the previous game, there was voice dubbing done in Japanese.

A year after the events of the first game, Mike has suffered a nervous breakdown and moved back to his childhood town of Crowley, Texas to recover. While there, he reconnects with Rita Scanlon, his high school sweetheart. However, after a high school reunion, she's found decapitated in a park. Mike is almost immediately suspected of the crime, and to make matters worse, he's started to have very familiar headaches and nightmares. To clear his name and figure out the real culprit, Mike has no choice but to travel back and forth between Crowley and the Dark World to take care of the Ancients once and for all.

In the absence of the real-life Mike Dawson, this project was helmed by Raymond Benson, who wrote the script and later went on to write James Bond novels, as well as novelizations of Splinter Cell and Metal Gear Solid.

I'd better not edit these tropes, I might get a splinter or a spider bite:

Oh no, not the Hall of Indices again! The only way out of here is indices!