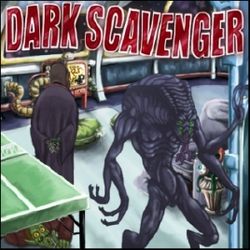 "Ding! Falsen's crispy toes pop out of the toaster. Wait...what?
— The Narrator
Advertisement:

Dark Scavenger is a point 'n click, sometimes first-person, sometimes top-down RPG with turn based combat developed and published by Psydra Games in 2014. It's weird.

It begins when you're drifting aimlessly through space (for some reason), and suddenly a giant, alien, extra-dimensional blob-thing comes and beats the daylights out of you. You wake up in a ship surrounded by three aliens; Kamaho, a polite skeleton man, Falsen, a green-skinned businessman, and Gazer, a large creature with sleek black skin and no mouth. They explain that they've detected a large source of power on the planet below, and they need your help to find it so they can fuel their ship. However, you soon realize there's more to what's happening then you first thought...