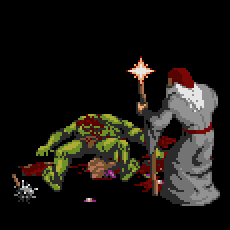 His icon (taken from The Immortal).
It's weird to think of yourself as "the old guard" in something that's like 3-4 years old, but shit's changed for the better and worse. What will Let's Play be like in 2011? You can read all about it in my upcoming book - "Let's Read" subtitled: "2007 - the Year of the VLP" and sub-subtitled: "This is as meta as it gets." Ghost written by Stephen King and ProtonJon. On the back of the book jacket you will see a picture of me holding up a bunch of controllers while a camera is on me, and the wires are all tangled and I'm sorta shrugging as if to say "I think I'm in over my head here!!!"
— slowbeef, in the opening post for his The Immortal Let's Play, 2010
Advertisement:

of him playing The Immortal with commentary over it and called it "Let's Play". Numerous adapted this term for this kind of video.note Despite often being credited as the ur-father of the entire Let's Play phenomenon, slowbeef himself downplays this role and notes that he at the most just made the term popular. Filming gameplay with commentary dates back to the VHS era, and screenshot LPs on the Let's Play Archive have dated back to at least a year before he started out. In 2008, he along with fellow Something Awful user Diabetus created Retsupurae, a YouTube account in which the two make fun of the worst LPs out there, for which he has gained an even bigger following than his Let's Plays, which he still continues to do. Retsupurae also spawned a spinoff called Webcam Ward, in which the same principle is applied to non-gaming YouTube videos.

slowbeef's LPs can be found here,

See also Diabetus, who guest stars in many of his videos (and vice-versa sometimes).