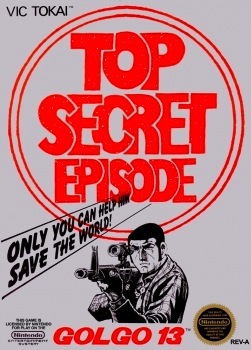 He'll blow you away.
Advertisement:

Seven video games have been released for the Golgo 13 franchise:

Golgo 13: Top Secret Episode (Gorugo Sātīn Dai-Isshō Kamigami no Tasogare?, Golgo 13 Episode 1: Twilight of the Gods) is an action video game for the Nintendo Entertainment System (NES), which was released in 1988. In this game, based on a popular manga, the player takes on the role of Golgo 13 (also known as Duke Togo), an assassin whose objective is to destroy the leader of the Drek group. On the way, Golgo 13 must pass through several areas, including East Berlin, Athens, and Alexander Island, which is located off the coast of Antarctica. 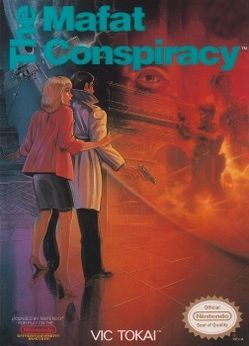 Golgo 13: The Mafat Conspiracy (Gorugo Sātīn Dai-Nishou Ikarosu no Nazo, Golgo 13 Episode 2: The Riddle of Icarus) is a Nintendo Entertainment System video game released in 1990. A weapons satellite has been snatched out of orbit, and the world is facing nuclear destruction.

Behind this act is a group of terrorist known as the Mafat Conspiracy. The terrorists plan to extort the U.S. and Soviet governments by threatening to make their satellites fall from space. The Mafat are demanding that the Soviets turn over their research on electromagnetic waves, and the American government to give them the Los Angeles, a ship that is equipped with nuclear warheads. The CIA and KGB are blaming each other.

Golgo 13's mission is to eliminate the leader of the Mafat Revolutionary Group, destroy the Satellite Capture System, and rescue Dr. Barrows. The doctor was kidnapped from his lab in England many years ago and taken to Paris, where he remains in confinement.

Tropes present in these games: