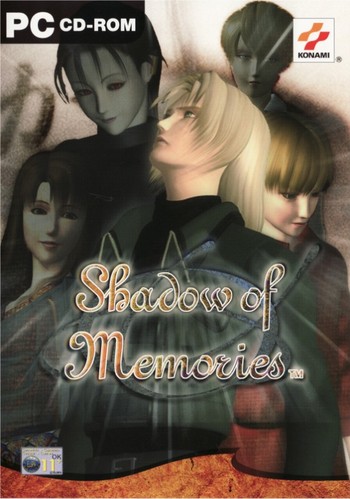 An Adventure Game released for the PlayStation 2 by Konami in 2001, and titled Shadow of Memories originally and outside of the US. It was later ported to the PC, Xbox, and eventually the PSP.
Advertisement:

The main character of the game is Eike Kusch, a young man who is murdered during the game's first cutscene. Pretty short game? Well, not really — Eike is promptly revived by a being called Homunculus, who offers him the chance to change his fate. Eike, naturally enough, accepts. However, the killer isn't going to be put off by being thwarted just once. If Eike wants to live, he'll have to find the real reason someone's out for his blood, which may be rooted deeper in history than he can imagine.

The game soon falls into a pattern: Eike is killed at the beginning of a level, revived, and then must travel into the past in order to prevent his death from occurring. The plot, however, swiftly becomes very complicated, as details about the reason for Eike's deaths, the possible identities of his killer, and the Homunculus's true motives are brought into play. The choices the player makes over the course of the game retroactively decide Eike's true origin and nature, and determine which of the six possible endings will be shown. Another two endings become available once the first six have been completed.