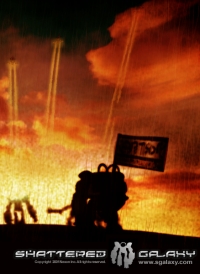 was released in 2001 by Nexon (now Kru Interactive), and is an attempt at combining the MMORPG and the Real-Time Strategy.

Once upon a time, an alien artifact was discovered on Earth. It appeared to be a portal of some kind, and robots sent through it were able to return from the other side. But when a fateful rat named Russell was shunted through, the portal activated, teleporting not only itself but a fair chunk of Terra's surface to its home planet, Morgana Prime. There the human survivors discovered abandoned robotic soldiers which could be controlled by telepathy. Instead of, say, trying to get home, they immediately divided into factions and started fighting. And that's where the Excuse Plot ends and gameplay begins.

Despite being labeled with the "MMORTS" genre, Shattered Galaxy is actually more "Real Time Tactics", in that you don't have a base: you don't need to Construct Additional Pylons or manage your Command & Conquer Economy. Instead, all you have is a Digital Avatar and 20 points to use in your Point Build System, which mostly determines which soldiers you can control and how well you equip them. You can take small squads of soldiers (6 to 12) into battle and fight the other side, but blindly exterminating the enemy is not the only way to win, nor the most important one. Embedded into every map are several discs of Applied Phlebotinum called "Points of Contention", or PoCs. If your side captures enough of them, you win. As such, most gameplay and unit design revolves around capturing or defending PoCs, and it is much more possible to Leeroy Jenkins in this game than it is in most RTS titles.

The game features a persistent world consisting of 88 sectors, three of which are capitol cities for the three factions on each server. You fight on each map to claim it for your faction or defend it from desecrators. Large battles can consist of about 30 people per side.