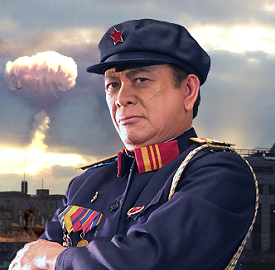 "Soon your base will glow like the sun!" Explanation... See "The Flash" section on the Nuclear Weapons page. It's not pretty.
Adam: Let's go; there's a nuke. Just telling you again.
Herman: That's what they do to everything; it didn't work in Independence Day.
— Lazer Team
Advertisement:

When faced with a Monster of the Week, military commanders show an unhealthy urge to move right up to the (current) Final Option (or the local equivalent) when the monster can't be killed with bullets. They never stop to consider using something else in their arsenal that's a bit more powerful than a rifle, but won't cause as much collateral damage as a tactical-yield nuclear bomb. It's all or nothing. If hand-held guns didn't do the trick, forget artillery, tanks, bunker-busters, fuel-air explosives, chemical or biological agents, just get the nukes.

The heroes will probably object to this, only to be told that there's no time to "study the monster", it has to be taken out now (along with every other living thing inside a radius of five kilometers) before it gets bigger and destroys more things!

From there, it becomes a race to see if the good-guy scientists can find the monster's Achilles' Heel or get the Forgotten Superweapon back online before the Army gets its approval to start lobbing warheads. Of course, if the Army wins the race, it's likely that the nukes will either do nothing, or make things much, much worse, making the heroes the last hope.

As such, note that Nuke Em is only when using nukes is a bad idea, either because it's clearly overkill or it's likely to backfire. If it's a well-considered and reasonable choice given the situation, then it's the Nuclear Option. Sometimes exactly which trope the planned nuking falls under may be debated In-Universe.

Very common in Science Is Bad stories and usually involves a General Ripper (in fact, the Trope Namer for General Ripper made this his signature). A popular way of ruining someone's day with Death from Above. Related to the Idiot Ball, depending on the size of the strike.

Related to Deus ex Nukina if the nuking is being used in a situation where it should be obvious that it realistically wouldn't have any effect, fallout and massive collateral damage aside. For the biological weapon equivalent, see Biological Weapons Solve Everything.

If you happen to be playing a video game, and you're directly responsible for launching it, it's a You Nuke 'Em situation.

See also: Five Rounds Rapid, Immune to Bullets, Armies Are Evil, and Radiation-Immune Mutants. Not related to the incredibly egotistic alien-slaughterer of the same name.

open/close all folders
Anime & Manga
Manga and anime is mostly immune to this, due to the Nuclear Weapons Taboo. In fact, expect the opposite to be true: that even if it's proven that nothing but a nuke would work, there will be extreme resistance to the idea. Darker and Edgier such stories may even play this straight, of those responsible for finally pressing the button considering everything up to ritual suicide, as a result of guilt.
Comic Books
Fan Works
Films — Animation
Films — Live-Action
Literature
Live-Action TV
Music
Pinballs
Tabletop Games
Video Games
Web Comics
Web Original
Western Animation
Feedback