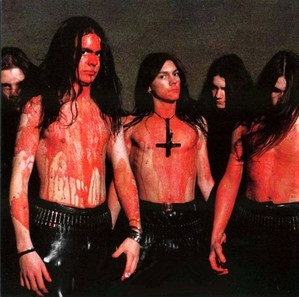 The band as depicted on the back cover of Like an Everflowing Stream
Advertisement:

Dismember are a Swedish old school Death Metal band that existed between 1988 and 2011, often considered a Trope Codifier for that style of death metal. Although they briefly split up in 1989 after the release of some demo tapes, they got back together in 1990 with a different lineup containing members of the band Carnage (a band featuring future Carcass/Arch-Enemy guitarist Michael Amott; Carnage disbanded after he joined Carcass, leaving the rest of Carnage to start Dismember). The band released another demo in 1990, which would secure a record deal with now-famous metal label Nuclear Blast.

The band released their debut Like an Ever Flowing Stream in 1991, considered by many one of the pinnacles of death metal at that time and even today. Along with the aforementioned Carnage's album Dark Recollections, Entombed's Left Hand Path, Grave's Into the Grave and others, the album helped establish Sweden as a major force in death metal. During this early period, Entombed drummer and de-facto leader of the Swedish scene Nicke Andersson was heavily associated with them: Andersson performed the bass tracks on their first demo, most of the lead guitar work on their first post-reform demo and Like an Ever Flowing Stream, named the band, and designed their Iconic Logo.

The song "Skin Her Alive" had the band make headlines for allegations of obscene content. The band ultimately won the ensueing court battle. avoiding certain claims of being "pornographic, obscene or indecent". This case gave them a name for their second album, Indecent and Obscene in 1993, also widely regarded as a classic death metal album. Nonetheless this incident and their quality music earned the band a devoted following.

Over the course of the next fifteen years, the band released six more studio albums that experimented with more melody and Hard Rock influence than their early work ontop of their trademark buzzsaw sound, sometimes to much acclaim, other to more debated stances; these albums are generally not as popular, but still kept the band afloat in the scene and as a touring act. The band folded in 2011 after headlining Death Feast Open Air, having not played a show in roughly 3 years by that point.

Dismember continues to be a very popular and almost universally respected band in the death metal community. They have been seen as extremely influential (generally, in the Swedish scene, only second to Entombed and arguably Grave) for their violent but melodic approach to the genre that, unsurprisingly, has spawned many derivative bands seeking to expand upon their style. One of the aspects they are acclaimed for is the fact although their sound did change, it was not to nearly as drastic an extent to such Entombed or other bands (even outside the Stockholm scene such as At the Gates) did, earning them what's seen as a much more consistent career. In 2019, they reunited, and have been in talks to begin work on new record sometime in the future.

Tropes that apply to Dismember: