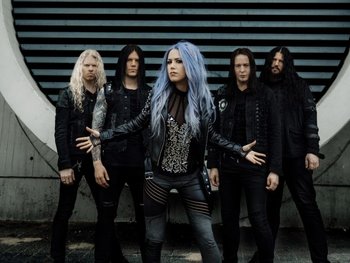 The current lineup. L-R: Jeff, Daniel, Alissa, Michael, Sharlee
Tear down the walls,
Wake up the world,
Ignorance is not bliss,
So fed up with second best,
Our time is here and now.
"We Will Rise"
Advertisement:

In 2000, Liiva was asked to leave the band. His replacement turned out to be Angela Gossow, a German singer with a major case of Singing Voice Dissonance. Her first album with the band, 2001's Wages of Sin, was the band's breakthrough album. Chris Amott left again in 2012 and was replaced by Nick Cordle; additionally, in March 2014, Angela Gossow announced her departure and welcomed Alissa White-Gluz of The Agonist as her replacement. Around the end of 2014, Nick Cordle was fired for undisclosed reasons and was replaced by Jeff Loomis.

Under black flags we trope!

"The World is Yours"

"The World is Yours"