Music / At the Gates 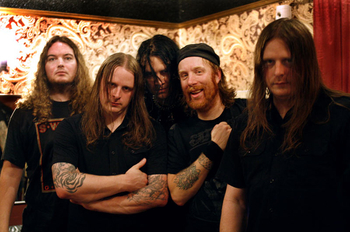 At the Gates is a metal band from Gothenburg, Sweden, and possibly, out of the three Gothenburg bands that pioneered the genre of Melodic Death Metal, the most-often cited as an influence (the other two being Dark Tranquillity and In Flames).

The band was formed in 1990 by former members of the death/black metal band Grotesque. They recorded a debut EP, Gardens of Grief, which led Peaceville Records (yes, that one) to sign the band, and they released their debut album, The Red in the Sky is Ours, which featured an eclectic and technical sound, including, for instance, neoclassical arrangements and even a string solo.

They continued with their technical style on their second album, With Fear I Kiss the Burning Darkness, but moved away from it with Terminal Spirit Disease, considered their breakthrough album. In 1995, they released the legendary Slaughter of the Soul, possibly the most important album in defining melodeath as a subgenre. Slaughter of the Soul was a huge commercial success (unfortunately for disgruntled fans of the band's more complex early works), but despite this success, the band broke up in 1996.

Like fellow melodeath pioneers Carcass, they reformed at a later date (in AtG's case, 2007) to play several reunion shows.

Despite originally planning for their 2007-2008 tour to be their last, At the Gates reunited once again in 2010 for some festival dates and have continued to play shows since then. Although they had stated in numerous interviews that they had no plans to release new material, the band confirmed in January 2014 that they had signed to Century Media Recordsnote The same label of fellow melodeath co-Trope Codifiers In Flames and Dark Tranquillity and entered the studio in the summer to record At War With Reality, their first album in 19 years.

Tropes of the Soul: