Music / At the Drive-In 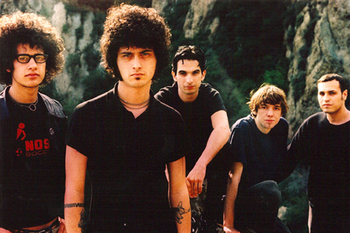 At the Drive-In is a Post-Hardcore band from El Paso, Texas that were formed in 1993 by vocalist Cedric Bixler-Zavala and guitar Jim Ward. For the first few years of their existence, the band gradually built up a cult following, mainly due to the intensity of their live act.
Advertisement:

Following a couple of EPs and a debut album that went relatively unlauded, the band hit its stride with the additions of Tony Hajjar and Paul Hinojos on drums and bass respectively, along with bassist Omar Rodríguez-López transitioning to guitar. Their lineup finally stabilized, the band released their sophomore effort In/Casino/Out in 1998, which was followed by a period of virtually non-stop touring that solidified their reputation as one of the preeminent bands of the Post-Hardcore movement. The band also released the highly regarded EP Vaya in 1999.

In 2000, the band released their third album, entitled Relationship of Command. Although the record was critically lauded and attracted several new fans, the band announced an indefinite hiatus in early 2001, citing their exhaustion over touring along with disagreements over the direction the band should go on.

Following the dissolution of the group, Rodríguez-López and Bixler-Zavala would go on to start the prog-rock band The Mars Volta, while Ward, Hinojos, and Hajjar formed the alternative rock band Sparta. In 2012, the band temporarily reformed to play a series of live shows, though no new material was produced. The band reunited again in 2015. They released the single "Goverened by Contagion" in December 2016, followed by a new album, Inter Alia, in 2017, and an EP, Diamanté, later the same year.

''At the Drive-In contains examples of the following tropes: