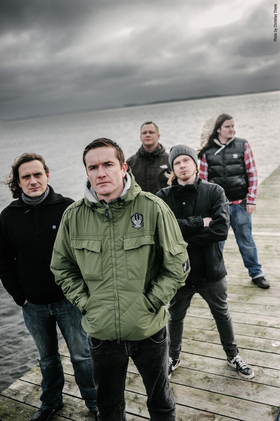 "For the weakest of the weak,
For the lowest of the low
My voice for the voiceless,
My fists for the innocent!"
—"Voice of the Voiceless"
Advertisement:

Heaven Shall Burn are a German Metalcore-influenced Melodic Death Metal band. They were formed in 1995 by guitarist Maik Weichert and drummer Matthias Voigt, initially under the names "Before The Fall" and "Consense" before vocalist Marcus Bischoff and his bassist cousin Eric would join and, inspired by the title of a Marduk album, change the band's name to what it is now. According to Marcus, despite how it may seem, the band's name is not an anti-religious statement but rather a reference to people living in their own "heaven" to drown out the truths of the world around them.

They would then independently release a debut EP entitled "In Battle There Is No Law" in 1998, named after Bolt Thrower's first album. They were soon signed to Lifeforce records in 2000 and released their debut full-length, followed by a sophomore effort in 2002, which also came repackaged with the EP.

For 2004, Antigone was released, and Iceland Neo-Classical composer Ólafur Arnalds provided classical music parts for some of the songs off that album. The rest of the album was also more melodic in nature. In 2005, Patrick Schleitzer had left the band, being replaced by Alexander Dietz.

They signed to Century Media for Deaf to Our Prayers. In February 2008, Iconoclast (Part One: The Final Resistance) was released. The album lyrically reviews subjects such as Laicism, Nietzsche's “God is dead” philosophy, heroes of the German Resistance in World War II, and Germany's ongoing struggle to reconcile with its past.

In May 2009, Heaven Shall Burn released their first DVD, Bildersturm - Iconoclast II (The Visual Resistance). Invictus (Iconoclast III) was released in 2010, ending the Iconoclast trilogy.

In 2013, Veto was released, finally ending their decade long streak of releasing albums bi-annually. Wanderer came in 2016 along with a bonus disc of cover songs recorded during the session, and after a four year gap in releases, the double-album Of Truth and Sacrifice finally came in March 2020 and is considered to be the band's longest and most ambitious record yet.

Heaven Shall Burn displays the examples of the following: