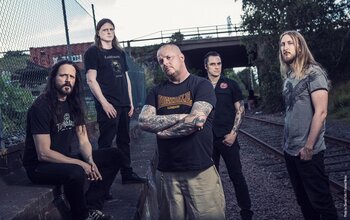 The band as of 2017
Advertisement:

The Haunted is a Swedish Melodic Death Metal band formed in 1996. Initially formed by three of the then-former members of At the Gates (Adrian Erlandsson and brothers Jonas and Anders Bjoler), they have since gone on to transcend their status as "the band who rose from the ashes of At the Gates" and become a big name in melodeath in their own right.

After recruiting singer Peter Dolving, formerly of hardcore punk band Mary Beats Jane, their debut Self-Titled Album was released in 1998 and got them on many people's radar, not just for the credibility of the members involved, but for its energetic sound and strong riffs which many cited as a worthy successor to the formula established by AtG while also remaining distinct - in particular, its strong hardcore and groove influences gave them a unique sound amongst their peers.

Not long after this, Dolving would leave the group. He was replaced by Finnish-born vocalist Marco Aro, formerly of the groove/death metal band Face Down. Upon the release of their second record Made Me Do It, Aro proved to be a bolt of energy in the band, garnering recognition for his powerful, high velocity performance and showmanship. Strong reviews and tour schedules followed, and in the years leading up to their next album, it seemed like the band showed no sign of slowing down.

That was, until a giant wrench was suddenly thrown into things. Shortly after a long tour in support of their acclaimed third record One Kill Wonder in 2003, Marco abruptly quit the band with no explanation given. The remaining members, unsure of what to do next, reconnected with Peter Dolving asking him if he'd like to return to the band. He accepted, and made his comeback on their fourth album Revolver in 2004. While it was well received, it foreshadowed the beginning of a long, controversial chapter in the band's history.

On the albums that followed, The Dead Eye and Versus, the band began to stray further from their melodic death roots, largely thanks to Dolving's musical direction in his other projects, and this culminated in their 2011 album Unseen, which was an almost complete departure from their established sound in favor of an alt-metal influenced direction. The album was extremely negatively received by fans, a reaction which was not helped by Peter's pretentious statements during updates leading up to its production. Following this, a chain of events would unfold which would put the band's status in doubt.

In 2012, Dolving once again exited the band, this time permanently, and released an unprofessionally worded, lengthy, one-sided rant about the reasons for his departure, further souring his reputation among fans. Then, following the announcement that they were searching for a new singer, Anders Bjoler and long time drummer Per Jensen also quit. This, combined with the reunion of At the Gates, caused the band to go on a 2-year hiatus.

During this time, Jonas Bjoler and remaining guitarist Patrik Jensen had a discussion about the group's future, and when thinking at length about who should sing for them, the answer was something no one expected. After over ten years, their other former singer Marco Aro was contacted. Aro, who had recently returned from an 8-year hiatus from music by joining death metal band The Resistance, was open to the idea yet hesitant, but in 2014, he was officially announced to have returned much to the surprise and rejoicing of many a fan.

Marco would go on to finally open up, revealing that the reason he left the band so suddenly all those years ago was that he had developed a drug addiction during his time touring with the band, and it began to have a negative impact on both his psyche and his behavior in his personal life. As it turned out, his habits had begun to affect the way he acted around his family, and wanting to be better for his children and wife, left the band to get himself back together. After rearranging a new schedule and having a discussion with his family over whether they were okay with his choice, he was officially back.

With the return of Marco and the addition of prolific metal guitarist Ola Englund to their revamped lineup, the new incarnation of The Haunted gave rise to their eighth studio album Exit Wounds in late 2014. The album completely shed the sounds of their last few records and made a complete return to their energetic groove-tinged melodic death roots, which was a welcome direction in the eyes of fans even if it wasn't nearly as acclaimed as the prior Aro releases. After Aro's other band The Resistance abruptly called it quits in 2016, the band quickly got to work on their ninth album Strength in Numbers, which was released in August 2017.

Even despite going through so much inner turmoil and instability, The Haunted continue to soldier on and remain one of extreme metal's most notable stories of determination. Per an announcement from Ola in August 2022, the band are in the process of putting together ideas for their tenth studio album, with a release date to be determined.

Tropes Made Me Do It: