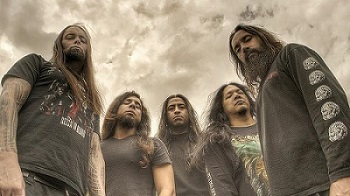 Disgorge are an American Brutal Death Metal band hailing from California. However, they were important in the scene in that they were (arguably) pioneers in the sub-sub-genre known as Slam Death Metal due to the gurgled/low pig-squealed vocals and rhythms over leads, with the latter being almost non-existent.

Originally starting off as a three piece, they eventually evolved into a four piece, then a five piece, with Ricky being the only member playing in all albums.

They split up in 2006, reasons unexplained. It wasn't sure of what had happened to the band until they announced their reunion in 2011, with a new vocalist and bassist. They are currently working on a new album, entitled Hymns of the Fallen, although they are still having issues getting the album out.

Tropes that apply to Disgorge: