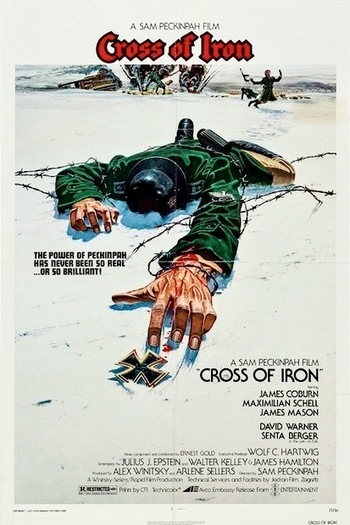 Colonel Brandt: What will we do when we have lost the war?
Captain Kiesel: Prepare for the next one.
Advertisement:

A 1977 World War II film directed by Sam Peckinpah, based on the 1955 German novel The Willing Flesh by Willi Heinrich, who served during the war and was wounded five times. It is set on the Eastern Front, specifically the retreat from the Taman Peninsula during the Russian offensive of 1943-1945.

The film focuses on a German infantry regiment commanded by the war-weary Colonel Brandt (James Mason), whose subordinates include his embittered adjutant, Captain Kiesel (David Warner), and the battle-hardened, officer-hating Corporal (later Sergeant) Steiner (James Coburn). Their lives are thrown into disarray by the arrival of Captain Stransky (Maximilian Schell), an arrogant, aristocratic Prussian and a Glory Hound who wants to win the Iron Cross. When Steiner refuses to lie for Stransky when the latter tries to claim credit for an attack that might get him the Iron Cross, a battle of wills ensues between the two men, and when Steiner and his squad end up behind enemy lines, he soon discovers that there are people out for his blood in both directions.

Peckinpah's only war film, it is also notable for using a large number of accurate Soviet and German weapons and vehicles, thanks to being filmed in Yugoslavia.