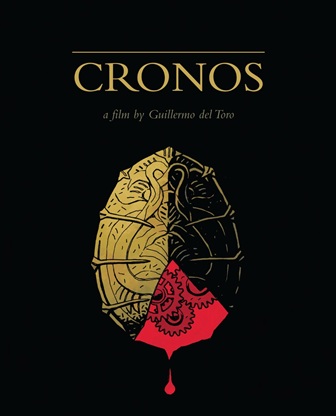 The debut film of Guillermo de Toro. An old antique dealer, Jesús Gris, and his granddaughter Aurora find a 450-year-old mechanical device shaped like a scarab in the base of a statue. Gris is pierced by the device's legs and stinger and finds himself growing younger but also plagued with cravings for blood. Meanwhile, a dying businessman sends his thuggish nephew (Ron Perlman) to claim the device for himself.

The film was given a Criterion Collection (number 551) release on DVD and Blu-ray with updated subtitles and some nice cover and booklet art by del Toro's friend and frequent collaborator Mike Mignola.

Several elements from Cronos will be familiar to anyone reading/watching The Strain, and vice versa — an elderly antique shop owner, unconventional vampires and an evil old man seeking immortality, for starters.