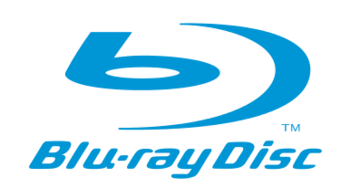 "Without Blu-ray, your HDTV is just a TV."
— Marketing slogan
Advertisement:

The Blu-ray Disc, better known as just Blu-ray (as "BD" doesn't roll off the tongue as nicely), is the current consumer optical media format, the successor to Laserdisc and DVD, developed in the mid-2000s concurrently with the mainstream rise in High Definition content (Laserdisc had several Japan-only experimental HD titles via MUSE in the mid-90'snote The Back to the Future trilogy, Terminator 2: Judgment Day, Jurassic Park, E.T. the Extra-Terrestrial and Lawrence of Arabia, but it obviously never caught on because HDTV was nowhere near mainstream yet even in Japan and Laserdisc was already an incredibly niche format compared to VHS to begin with). It was introduced by the Blu-ray Disc Association, an industry consortium which includes Sony, Philips, Apple, Panasonic and many others. The discs are the same physical size as a DVD, but have a capacity of 25 gigabytes per layer, large enough for a feature-length film stored at 1080p, with enough leftover space for additional features and extras. The Blu-ray format was used for the games discs for the PlayStation 3, and for a time the game console was the cheapest Blu-ray player on the market, a factor that helped overcome some of the objections to its high price point. Blu-Ray eventually won the format war

between it and Toshiba's HD-DVD format to become the only consumer-facing high-definition optical disc format.

The format's name comes from the blue-colored laser used to read the optical disc. The blue laser used has a shorter wavelength than the red ones used for DVD players (and infrared for CDs), and which allows for more data across the disc. The only drawback of this was that, as early as 2006, Blu-Ray drives were quite a lot slower at reading and seeking than DVD Drives were

, though in the years since, the rise of 16x Blu-ray drives have made things a lot faster.

Even 10 years after the format's introduction, due to its lack of adoption in settings outside the home (like in portable devices or car theater systems), many movies are released as a "combo pack" that contains both a Blu-ray and a DVD. The vast majority also include a download code for a digital copy, redeemable either via Apple's iTunes or through systems like UltraViolet and Movies Anywhere, which allow any content purchased on one digital service to be viewable on others.

As time has gone on however, Blu-ray has matured. HDTVs are now very common in households, and pretty much all current media is shot in HD or above. From a distribution standpoint, DVDs are still significantly cheaper to mass-produce, but Blu-ray isn't that much more expensive, which is why movie studios print both. Many older films (such as the original, non-George Lucas Altered Version cuts of the original Star Wars trilogy) are still only officially available on DVD. However, as quality up-converting of older content becomes easier and cheaper, and creating HD content becomes easier (even most cellphones shoot at a level of HD quality now), and demand for back-catalog films increase, Blu-ray should continue to see improved adoption. note The rise of Made on Demand services from companies like Amazon & Warner Archive has helped, allowing distributors to make a limited print run for fans and gauge future demand.

On the technical side, Blu-ray, like DVD, can use region codes (there are only 3, compared to DVD's 7) but most mainstream titles are mastered region-free, and even if a disc is region-locked, Japan and America are in the same region, Region A, meaning that Japanese discs (like hard-to-find anime titles and rare high-end boxsets that cater to the Asian market) are fully compatible with US players and vice-versa. Region B is for the EU, and Region C is for Russia and the parts of Asia west of the Far East.

Another unique feature of Blu-ray is "BD-Live", where discs can be updated via an internet connection to access additional content. Most of the feature's use, however, has been to provide discs with updated trailers from the studio (thus averting one of the major issues with both VHS tapes and DVDs, in that the previews would become quickly outdated).

Blu-rays were expected to replace DVDs as the standard home video format, which Sony happily claimed would be a Curb-Stomp Battle, but the takeover hasn't really panned out due to a variety of factors, both expected and unforeseen, with many of them paralleling the similar issues that prevented the Super Audio CD format from making any major headway.

In 2009, the Blu-ray 3D extension was introduced, allowing stereoscopic movies to be released on Blu-ray discs. 3DTVs and Blu-ray 3D compatible players were introduced into the market after CES 2010, and Sony added Blu-Ray 3D support onto the PlayStation 3 with firmware 3.5 later that year. However, 3DTVs proved to be a gimmick, and sales steadily declined annually. Common complaints include how the active glasses used with most 3DTVs induced eye fatigue due to the rapid flickering caused by the shutters, or how images on "Cinema-3D" TVs look blur and dark, and sometimes had crosstalk. Autostereoscopic LCD TVs that uses lenticular refractions like that of the Nintendo 3DS proved to be too expensive to be produced in large sizes and had too narrow a viewing angle to be practical outside of specialized use note they were tested on Sega's Let's Go Island deluxe cabinets however, and it was found that most players turn the feature off, having the same crosstalk issue as "Cinema-3D" TVs if the viewer sits outside of the optimum viewing angle. As a result, the format sold poorly, and many companies have considered pulling support for the format. Even Disney, an enthusiastic supporter of Blu-ray 3D in its early years, showed contempt at the format in the later years and scaled back releases considerably. Another notable detractor, Paramount, would go so far as to deny their worst performers anything more than a Vanilla Edition for the format, which included giving such films as the Ben Hur remake and Monster Trucks 2D-only and 1080p-only releases.note This doesn't appear to be a universal company policy, as the live-action Ghost in the Shell (2017) still had 3D and 4K releases.

In 2011, LG filed a lawsuit against Sony in a patent war regarding certain patents related to Blu-ray technology, going so far that LG tried to get the PS3 banned outside of Japan. Insiders thought it was an Evil Plan by LG to create an illegal monopoly on the Blu-ray industry, as evidenced by LG choosing not to re-sign a joint licensing agreement

and pressing the Sony lawsuit. However, the suit was eventually settled

, and as time has gone on, having a monopoly on Blu-ray technology has shown to be less meaningful. note While not a 'cash cow' for Sony, they do get a royalty of up to 15 cents a disc, and US$15 per player, but as the format matured, there's been plenty of money for electronics manufacturers to go around.

Unlike DVD, which launched with only four movies in Japannote The Fugitive, Eraser, Assassins and Blade Runner and an even more paltry two movies in the USnote Twister and Blade Runner, Blu-ray launched with seven filmsnote 50 First Dates, House of Flying Daggers, xXx, Hitch, Underworld: Evolution, The Fifth Element and The Terminator that can all lay claim to being the "first Blu-ray title". However, there isn't a single film on Blu-ray that cannot be bought on DVD, or vice versa to a large degree. In an attempt to push the format further, studios tried putting more special features on the Blu-ray copies, such as outtakes or extended commentary tracks, and it's not unheard of for bundle packs that include both a Blu-Ray and a DVD copy (and an "Ultraviolet" digital code) to give more of an incentive/alternative for those who are considering on upgrading, but are still stuck with a DVD player for their own reasons.

As there was with CDs and DVDs, some variants of Blu-ray discs exist. Hybrid discs that contain both a game (playable via a PS3 only) and video (playable by any Blu-ray player) have been released, but only a handful exist (most are related to anime titles like the Macross franchise). Record labels like Universal have created a hybrid Blu-ray disc called PureAudio, using Blu-ray's higher capacity to create an audio-only disc, that includes both surround and high-bitrate stereo mixes (and some videos), but like its older cousin DVD-Audio, it too has yet to catch on.note the format also suffers because it is largely compatible with Blu-ray players only, where as mixed-media CDs and DVD-Audio most times had a layer compatible with some backwards technology.

There are also a handful of Blu-rays that are in standard definition — these are always explicitly pointed out as SD on the box, but that doesn't stop some people complaining in customer reviews. These are usually done by concert videos to take advantage of the superior audio quality and by television series that cannot be remastered in HD to take advantage of the format's storage capacity and fit every episode on far fewer Blu-ray discs than DVDs (for example, Discotek Media released the complete Samurai Pizza Cats — 52 episodes of 25 minutes each — as a DVD boxset of eight discs and as a single Blu-ray disc). Of course, not all standard-definition programs abide by the practice, with the official Blu-ray releases of the first season of Haruhi Suzumiya and the 1963-2008 seasons of Doctor Who choosing to upscale the 480i footage for HD. Mixed-source productions primarily filmed in standard-definition such as Bamboozlednote filmed with videotape camcorders, reserving 16 mm film for the minstrel show scenes and the few Doctor Who seasons of its 1963-1985 Video Inside, Film Outside period with surviving film elements by the end of The New '10snote Namely Tom Baker's final season and Peter Davison's first tend to have the film footage remastered in true high-definition and the video footage upscaled to match on their Blu-ray releases, creating a greater visual disconnect between the two sources than on standard-definition formats.

Two contenders in The Eighth Generation of Console Video Games, the PlayStation 4 and Xbox One, use Blu-ray as their physical storage medium and support playback of Blu-ray movies, while the Wii U used a disc format that is essentially Blu-ray with the Serial Numbers Filed Off to save money on licensing fees, much like previous Nintendo consoles did with DVD, and the Nintendo Switch uses cartridges, thus is outside of this subject matter's scope. All four also have an emphasis on Digital Distribution, however, so whether gamers will prefer to stick with physical copies or embrace downloading games from the Internet will determine the future of the format in the games market.

With the advent of 4K televisions (which can display a resolution of up to 3840×2160, compared to an HD television's max of 1920×1080), a new wave of Blu-ray media and players have begun to see market in the Spring of 2016. Branded 'UltraHD', an initial wave of discs from 20th Century Fox and Warner Bros. (including titles such as The Martian and Mad Max: Fury Road) and players from Samsung and Panasonic were the first to use the updated format.note some Sony and Criterion Collection Blu-rays are advertised as coming from 4K masters, but are normal 1080p resolution, albeit with better fidelity and color gamut compared to earlier pressings. UltraHD discs are actually mastered at 4K and will display at its higher resolution when used with compatible equipment. Similarly to how Blu-ray releases of films often include a DVD copy, UltraHD releases typically include a standard Blu-ray copy. One snag of moving to 4K resolution is that a large percentage of film and TV were never mastered in 4K and are merely upscaled, leading to labels like "Real and Fake 4K"