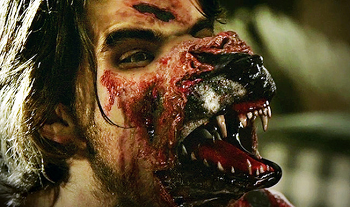 "I take it back, Gary. Something is wrong with meeeeeeee—ow!"
— SpongeBob:, "I Was a Teenage Gary", SpongeBob SquarePants
Advertisement:

Transformation Horror is a subtrope of Body Horror involving graphic and unsettling transformation sequences (not the trope) or continuous random mutation.

This can occur in the process of both involuntary and Voluntary Shape Shifting, and the final form, if there is one, doesn't have to be horrific. Even turning a person into a Ridiculously Cute Critter can involve Transformation Horror along the way. What matters is that the process of the transformation is unpleasant to witness, and horrifying just to imagine experiencing.

There are several standard forms of Transformation Horror:

There are several layers of reasons why people find this trope disturbing:

The most obvious is that transformation can be very Squicky: even in the case of one human becoming another human, facial features and major bone structures have to distort and rearrange. This naturally means that the course of a transformation tends to at least pass through the Uncanny Valley at some point, and quite often takes the scenic route.

Transformation also invokes the fear of losing control of your own body, or having it turn against you: Transformation Horror is unusual among the fantastical forms of horror in that adults fear it almost as much as children do because it has so many parallels and examples in Real Life. Puberty, unexpected changes in people around us, the ravages of old age, slowly losing one's own identity to mental illness, or worse, having a loved one turn against you, are all too real events experienced by most people at some point. All it takes to make horror from them is exaggeration. Even more extreme forms such as Mutation Horror or Terminal Mutation invoke our fears of disease and decay; in a sense, this trope is why we find diseases like cancer, rabies, leprosy, and the bubonic plague exceptionally terrifying: they transform a victim physically and mentally from the inside out.

Not all transformations are necessarily horrific; this trope can be averted in any number of ways. Lighter and Softer universes tend to have relatively tame transformations leaving any disturbing elements to the imagination. On the other hand, in Darker and Edgier universes, even Voluntary Transformations tend to be traumatic for everyone involved and depicted in all their disturbing glory. The medium can have a huge bearing as well: distortions that would be Nausea and/or Nightmare Fuel in live-action can be fairly innocuous in a cartoon.

The causes and circumstances of the transformation can make a difference as well. A character slowly turning to stone can be fairly mild visually, but played for Psychological Horror; an otherwise disturbing transformation can be mitigated when it's the result of a character Cursed with Awesome activating their Lovecraftian Superpower or receiving a Power-Upgrading Deformation.

An example of how this trope can be intentionally both invoked and averted is the Transformation Comic genre, with various comics averting this trope for fanservice or comedy, playing the trope straight as Fan Disservice to maintain a serious tone, or even alternating between the two.

Contrast Nothing Is Scarier and Fridge Horror for transformations that aren't actually shown/described, and Teleporter Accident for similar things happening instantaneously. Bit-by-Bit Transformation can be used both to subvert this trope by spacing out the squick into tolerable doses, and to exaggerate it by combining Horrifying Metamorphosis and Mix And Match Mutation.