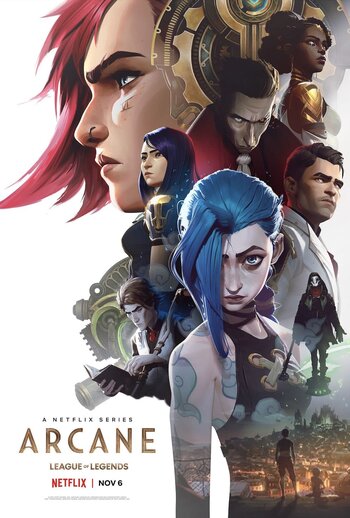 Every legend has a beginning.
Jinx: Are we... still sisters?
Vi: Nothing is ever going to change that.
Advertisement:

Set in the technologically-advanced, aristocratic city of Piltover, Arcane follows orphaned sisters Vi and Powder as they grow up in the Undercity, Piltover's impoverished and polluted lower levels. While the people of the Undercity struggle to survive and resist against Piltover's violent law enforcement, Silco, a ruthless crime lord with ambitions to raise the Undercity up into its own self-sufficient nation, begins to make himself known. Meanwhile, Jayce and Viktor, two gifted inventors, seek to revolutionize the city and the world itself by harnessing magic as a powerful new energy source. As tensions in Piltover and the Undercity escalate and war seems like an inevitability, Vi and Powder each find themselves at the center of the conflict as the city hurtles towards a breaking point.

The series was released on November 6, 2021 on Netflix, divided into three weekly acts of three episodes for nine in total. On November 20th, the same day as the third act release, a second season was confirmed to be in production.

Not to be confused with the similarly titled video game Arcane: The Armor Collector.

Welcome to the Tropes:

"We can't change what fate has in store for us, but we don't have to face it alone."
Feedback

The city of Piltover has become a hub for airship transportation in the fantasy world of Arcane.

Example of:
Zeppelins from Another World

The city of Piltover has become a hub for airship transportation in the fantasy world of Arcane.