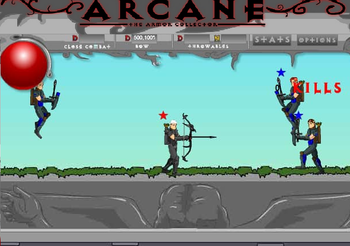 , subtitled in game as ''Arcane: The armor collector", is an Adobe Flash game, first released on June 9th, 2008. It covers the story of Arcane, the proud son of a poor blacksmith, who is taken to be trained as a gladiator at a young age. Unlike normal gladiator games, however, these games are aided by magical suits of armor that allow the wearer to infinitely resurrect.
Advertisement:

The gameplay of the story mode is simple: get enough "kills" for your team and win the match. There is a set amount of room you can move about in, with each stage having different platforms and sizes. Arcane can switch between armors and weapons midmatch, while the rest can only switch weapons.

My father inspired me to use these tropes: