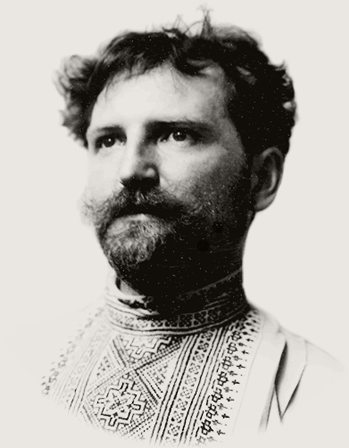 He was an early-20th-century artist working in Paris, and a patriotic Slav. So the beard was mandatory.
Alfons Mucha (born Alfons Maria Mucha, 24 July 1860 – 14 July 1939), known internationally as Alphonsenote the French and German variant of his given name Mucha, was a decorative artist whose work is often considered to be the Trope Codifier for the Art Nouveau style.note Ironically, though, he generally tried to dissociate himself from any school or fashion. He was born in what is now the Czech Republic, and after studying in various parts of Europe, he moved to Paris in 1887. While he was there, he became highly successful as a poster artist and graphic designer. (Among other things, he had a mutually very profitable professional association with Sarah Bernhardt, the most famous actress of the period, designing posters for her theatrical performances.) His posters

remain hugely popular to this day (though Mucha thought that his most important work was an occult analysis of the Lord's Prayer).
Advertisement:

Later in his life, he returned to his native land as Czechoslovakia gained independence after World War I. A dedicated Czech patriot, he designed postage stamps and banknotes for the new state, creating perhaps the most artistically beautiful money in history, and spent years on his "Slav Epic", a series of twenty huge paintings depicting the history of his nation and its people. But he's remembered for those posters and prints.

Mucha was a patriot, and had Jewish roots, so when the Nazis invaded Czechoslovakia in 1939, the Gestapo naturally hauled him in for questioning. They did release him eventually, but by then, the ageing Mucha was suffering from pneumonia. He died not long afterward. Although he was never entirely forgotten, his work slipped out of fashion for a while, but enjoyed a new burst of popularity in The '60s, when his taste for swirling floral designs again came into line with prevailing trends.

Mucha’s usual subject in his posters — an attractive woman, clad or partly clad in flowing robes, frequently framed by a “halo” or decorative border, staring thoughtfully at the viewer or pensively into space — has become a minor visual trope in its own right, frequently being the subject of Pastiche or Affectionate Parody, as here,

Tropes often associated with Mucha include: