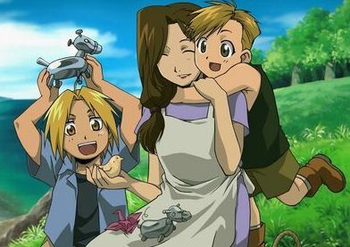 One good way to show how sweet and caring a mother is is to depict her with her hair tied in a loose braid or ponytail and put on her shoulder. For some reason, this detail immediately tells the audience, "Hey, this mom has to be nice and gentle!"

This can be explained by the fact that mothers usually have less time to spend on their appearance than other women. Since the makers of a show probably don't want to make their characters ugly, one way to demonstrate motherhood is to give her a low-maintenance hairstyle. Housewives (most likely to be the mothers of young children) also need a hairstyle that's going to stay out of the way when they're doing housework and cleaning up. This may or may not come with an apron to further emphasize their motherhood. Since the hair is only tied up loosely, it creates a soft, relaxed, gentle appearance. Putting the hair over the shoulder allows you to see her hairstyle from the front, while also providing a slight element of Fashionable Asymmetry. Braiding the hair that way is also faster and easier than braiding it behind one's head, contributing to the low maintenance angle.

Since mothers are often the object of a Death by Origin Story, this is also (infamously) known as the "Dead Anime Mom Hairstyle". note This also applies to non-motherly female characters (though their fate varies on each character) or even male characters.

A Sub-Trope of Long Hair Is Feminine.

The Tragedy of Rio's Mom

Rio shares the tragic story of his mom who had a side ponytail...

The Tragedy of Rio's Mom

Rio shares the tragic story of his mom who had a side ponytail...