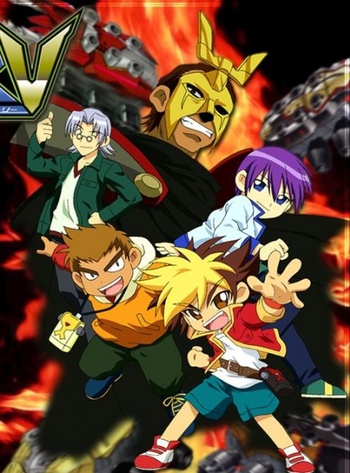 Ryūsei Amanogawa (Kyōko Chikiri) is an enthusiast of borg battles, where each player fights their opponents using their kabuto borgs (or borg machines), palm-sized machines that look like beetles. With the Tomcat Red Beetle as his kabuto borg of choice, he faces many opponents alongside his friends named Katsuji Matsuoka (Kanako Mitsuhashi) and Ken Ryūshō (Kei Watanabe).

Jinzō Konchū Kabuto Borg VxV (pronounced "Victory by Victory"; lit. "Artificial Insect Kabuto Borg VxV") is an Animated Adaptation of the Kabuto Borg toy line once sold by Takara Tomy. The anime was produced by G&G Entertainment and G&G Direction. Originally aired on BS Japan from October 5, 2006, to October 11, 2007, it also began airing on Animax on October 10, 2007. The anime is infamous mainly in Nico Nico Douga for its nonsense aspects, including but not limited to: