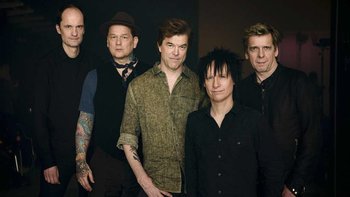 The band in 2017. L-R: Michael "Breiti" Breitkopf, Andreas "Kuddel" von Holst, Campino/Andreas Frege, Stephen George "Vom" Ritchie und Andreas "Andi" Meurer.
Die Toten Hosen (lit. "The Dead Trousers") are a German punk band from Düsseldorf formed in 1982. Their name comes from a slang term ("tote Hose") for nothing going on (based on an euphemism for male impotence), which was their opinion on the German music scene at the time. Through the years, they've been one of Germany's most successful acts, and with 15 studio albums to date, also one of the most prolific. The band members are most known by their stage names: Campino, Kuddel, Andi, Breiti, and Vom Ritchie (singer, melody guitarist, bassist, rhythm guitarist, and drummer, respectively). The former drummer, Wolfgang "Wölli" Rodhe, left the band due to injuries. The studio discography in chronological order is as follows:
Advertisement:

While some of their songs are irreverent and just for fun, a lot of them have political and social messages contained. Most often you will find songs decrying racism, xenophobia, corruption, and blind religious faith. The album Opium fürs Volk (Opium for the People) features heavy criticism of the Ten Commandments and the idea of paradise especially. Several of their songs also touch on more sensitive topics, often in order to bring more attention to a particular issue - with their fanbase, it can have quite an effect. Quite a few songs also deal with the personal lives of Campino & Co. note "Nur zu Besuch" (Just visiting) is a trip to the graveyard for Campino's mother, "Draußen vor der Tür" (Outside, in front of the door) is about making peace with one's father, and "Das ist der Moment" (This is the moment) makes references to their own children, and the band's evolution from their rebellious roots to their current lives. Especially the stance on religion of the band has notably softened by the time Auswärtsspiel was released, but it still holds a humorous/sarcastic edge to it.

They're also very popular in South America for some reason, though given how much that region loves its rock music, this should come as no real surprise.

Tropes concerning them and their works include: