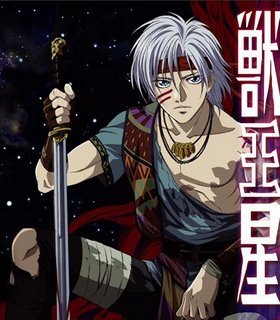 Only the prettiest can survive.
Advertisement:

Jyu-Oh-Sei (Planet of the Beast King) is a Science Fiction manga that ran in the shoujo magazine LaLa from 1993 to 2003. It was turned into a eleven episode anime in 2006, which was released in North America in 2008.

It tells the story of Thor, a young boy who, along with his twin brother Rai (who quickly dies), is kidnapped from his home and taken to the penal colony Chimera, the Planet of the Beast King. In order to survive in Chimera's harsh environment, the prisoners (and more importantly, the descendants of those prisoners) are forced to become like savage beasts. The more Thor learns about the planet, the more he is forced to accept that, in order to survive and escape Chimera, he will have to become a beast himself.

Aiding him in this is Tiz, the second in command of Sun Ring's female group, and Third, a schemer who prefers to work behind the scenes, rather than become a Top himself. Other characters include Chen, the Top of Sun Ring's women who is irrevocably in love with Third, Zagi, the leader of an outcast group of children who will later become Thor's rival, and Karim, with whom Thor falls in love. As the story develops, Thor will have to fight to survive and climb to the top of the food chain (so to speak) so he can leave the planet and discover why he was sent to this place.