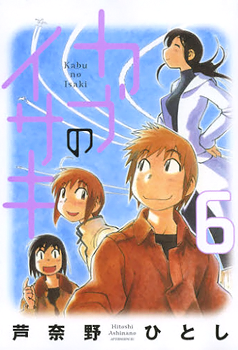 The sky isn't merely a cheap blue ceiling. It's something dreadfully high and deep.

In a world that's mysteriously ten times bigger than ours, most places are in the middle of nowhere. Kabu no Isaki is a Slice of Life Manga about some people who live in this world, and get around by flying a small airplane: a lightweight Piper Super Cub.

Written by Hitoshi Ashinano, the author of Yokohama Kaidashi Kikou, it launched on Afternoon in 2007 as a oneshot before semi-regularly updating as a full work until ending on January 2013.

There are no fights or villains, but this series makes just flying to the next town into an adventure.