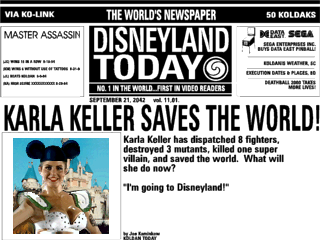 Where else could you go to celebrate something like that?

A series of popular ads running since the late 1980s following a noteworthy accomplishment, almost always something in the sports industry (i.e., winning the Super Bowl), and involving one of the Disney Theme Parks, with the implication that the only thing that could possibly be better than such a crowning achievement is a trip to a Disney park. The ads went a little something like this:

[Award-Bait Song-style version of "When You Wish Upon a Star" swells over a montage of whatever game Player has just won]
Announcer: Player, you just won the Big Game! What are you going to do next?
Player: I'm going to Disney World/Land (depending on which part of the country the ad is broadcast in)!!!
[pretty shot of Cinderella/Sleeping Beauty Castle (again, depending on the park) during the fireworks as the song fades out]

Ah, there simply is nowhere like the Happiest Place On Earth... (it helps that the player in question gets about $30,000 and a free trip out of it).

The slogan originated during a November 1986 dinner between Disney CEO Michael Eisner and his wife Jane and the pilots Dick Rutan and Jeana Yeager, who had just completed a non-stop around-the-world flight. Jane Eisner asked what they were going to do next, to which they replied, "We're going to Disneyland." The Eisners latched onto the sentence as an ideal slogan, and Disney rushed a commercial into production. Featuring New York Giants quarterback Phil Simms, it ran two months later, immediately after Super Bowl XXI, and became instantly iconic. The slogan is still a popular Stock Phrase/Stock Parody.