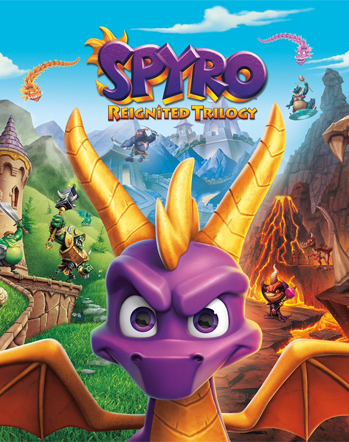 Spyro Reignited Trilogy is a remake of the Spyro the Dragon trilogy by Insomniac Games on the original PlayStation, consisting of Spyro the Dragon (1998), Spyro 2: Ripto's Rage!, and Spyro: Year of the Dragon. It's handled by Toys For Bob of Skylanders fame, with Sanzaru Games and Technicolor assisting the development, particularly the third game.

The game was first announced on April 6th, 2018 through its official website

, and various promotional materials were subsequently unveiled through newly launched Spyro social media, including YouTube, Twitter and Instagram. It was released on November 13th, 2018 for the PlayStation 4 and Xbox One. A port to the Nintendo Switch and Steam was released on September 3rd, 2019.

Compare with the Crash Bandicoot N. Sane Trilogy (2017), the Crash Bandicoot trilogy remake, whose commercial success likely greenlit this game to go forward in development. Spyro himself was made a playable character in Crash's racing game remake, Crash Team Racing: Nitro-Fueled (2019), along with his friends and even enemies, and then later pops up as some Wolverine Publicity for an event in Crash: On the Run!, where he asks you to defeat Dark Spyro. 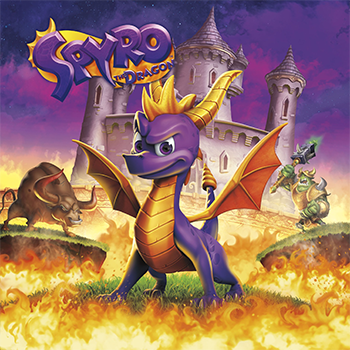 "Looks like I got some things to do!"
The first game in the series. After watching a televised interview in which he was called simple, non-threatening and ugly, the villainous Gnasty Gnorc casts a spell on the Dragon Kingdom. All of the dragons are encased inside crystal statues, and each gem in their treasure horde is given life as one of Gnasty's minions. However, the spell missed one dragon; Spyro. He, along with his dragonfly buddy Sparx, must travel throughout the Dragon Kingdom, freeing the dragon elders, recovering the stolen treasure, and defeat Gnasty Gnorc.
Ripto's Rage! 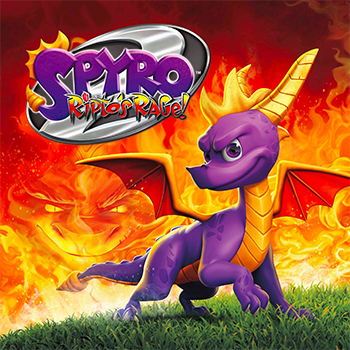 "A dragon is our only chance of stopping Ripto, and you know it!"
Spyro and Sparx are growing weary of a boring and stormy day, and decide to go to Dragon Shores for a vacation. However, their trip is put on hold when they go through the portal to Dragon Shores and instead end up in the world of Avalar. It's here that Spyro meets the Professor, Hunter, and Elora, who were experimenting with their own portal so that they could summon a dragon to oppose Ripto, an angry sorcerer with a noted disdain for dragons. Wanting to resume his vacation, Spyro decides to help his new friends and defeat the evil Ripto and save the day once again.
Advertisement:
Year of the Dragon 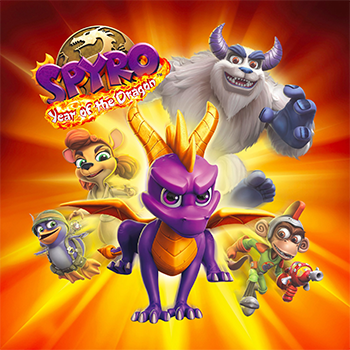 "Find the eggs and bring them back, Spyro. You're our only chance."
While Spyro and his friends are sleeping, a rabbit named Bianca followed by an entourage of malevolent Rhynocs come and steal all of the dragon eggs. Spyro, Sparx and Hunter follow her and end up in the Forgotten Worlds, which are ruled by an evil Sorceress. Utilizing the help of some new friends, including Sheila the kangaroo, Sgt. Byrd the flying penguin, Bentley the yeti, and Agent 9 the laser blaster-toting monkey, Spyro must find all the dragon eggs and put a stop to the Sorceress' evil plans for the baby dragons.
Feedback

Icy Speedway is the second Autumn Plains Speedway. This snowy realm sees you burning down Eskimos, on foot and in air. Serpents lay in the freezing water. You can find a special challenge from Hunter by supercharging the igloo.

Icy Speedway is the second Autumn Plains Speedway. This snowy realm sees you burning down Eskimos, on foot and in air. Serpents lay in the freezing water. You can find a special challenge from Hunter by supercharging the igloo.