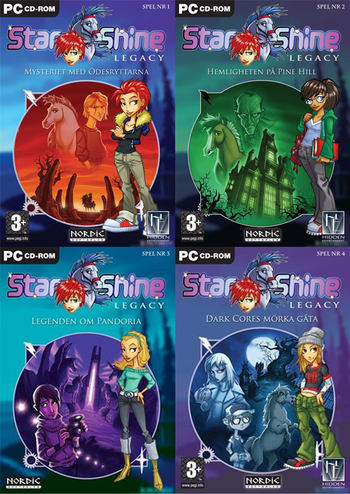 There are times in life
when something happens
and you have to make a choice,
and this choice will change
your path in life forever.
You create your own destiny,
but sometimes,
just sometimes...
destiny chooses you.

Starshine Legacy (SSL or SL for short) is a horse riding adventure platformer game created by Hidden Entertainment, Stabenfeld and Pixel Tales in 2005. Originally It was only accessable by Ponyclub membership. Because of this - and the fact that It's main target is the younger female audience, It has many negative features from It's W.I.T.C.H expies to being extremly glitchy and buggy. However, It's unpopularity - especially in America - saved It from being the talk of the negative review filled critics.

The first game: The Mystery of the Soulriders is about the young high school girl named Lisa whose father got a new job in Jorvik, so they have to move there. She quickly befriends three other girls and a blue horse named Starshine. Soon she learns about the mysterious organization named Dark Core and meet their leader Mr. Sands. When her beloved horse gets stolen by them, she must gather all her courage and inner strenght to get him back.

The second game: The Secret of the Pine Hill Mansion is about Linda the smartest girl in the Jorvik High School, who has difficulties balancing between her horse-riding practices and schoolwork. One day she discovers a mysterious picture about Mr. Sands where he stands near to a building called the Pine Hill Mansion. Along with her newest and closest friend Lisa they decide to explore It's secrets - despite being told not to. She also starts having weird visions about the Jorvik Dam being destroyed. What could these vision are trying to tell her and what's the secret of the Pine Hill Mansion?

The third game is about Anne. She is a somewhat snobbish character, with hair and heart of gold. She wants to win the Glamour No. 5. competention (As well as the photographer Derek's heart) and be the new face of their Perfume. But when a new enemy Jessica appears and seals her beloved horse Concorde into a strange dimension of Pandoria she must find a way to get him back as well as stop her newfound rival, who may be more than what she seems.

The protagonist of fourth and final game is Alex, a tomboyish girl who loves fixing things. We also meet her timid brother, who is constantly bullied by a boy named Buck. When his younger brother disappears after a race against a sinister girl, named Katja, Alex must find a way to get him back, as well as quicky learn to use her newfound powers, since an old enemy returns...