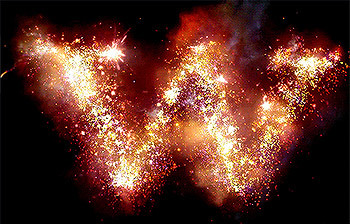 Fireworks are often used to celebrate important holidays and joyous occasions, such as Independence Day (in the US), New Year's Eve, or sporting events such as the Olympics. There are several different forms they usually take, such as circular bursts and sizzling comets. But in the fictional world, fireworks can take any form the producers desire. Animation, and especially CGI, have helped push the boundaries.

Subtrope of Spectacle and Rule of Cool. See also Fatal Fireworks, when they are weaponized.