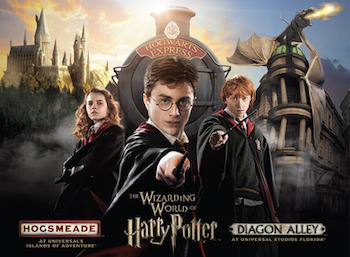 The Wizarding World of Harry Potter is a series of areas at the Universal Studios parks. They serve as elaborate replicas of the many locations in the Harry Potter series, both in appearance and overall sheer experience.

The first area is themed after Hogsmeade, which first opened at Universal's Islands of Adventure in 2010, and later at Universal Studios Japan and Universal Studios Hollywood in 2014 and 2016, respectively. It contains Harry Potter and the Forbidden Journey, a dark ride/simulator hybrid attraction, Flight of the Hippogriff, a junior roller coaster, The Three Broomsticks restaurant, several themed stores, and two shows: Frog Choir and Triwizard Spirit Rally. Exclusive to Islands of Adventure is another ride, Hagrid's Magical Creatures Motorbike Adventure, a roller coaster through the Forbidden Forest. The ride replaced Dragon Challenge, which served as another large scale coaster for the area.

Located only at Universal Studios Florida is an additional area themed after Diagon Alley, which opened in 2014. The main attraction here is Harry Potter and the Escape from Gringotts, an indoor roller coaster. Accompanying it is the Hogwarts Express, which transports guests to and from Hogsmeade and Diagon Alley. Along with that, the area also contains The Leaky Cauldron restaurant, even more themed stores, and another two shows: The Tales of Beedle the Bard and Celestina Warbeck and the Banshees.

The Wizarding World of Harry Potter provides examples of: