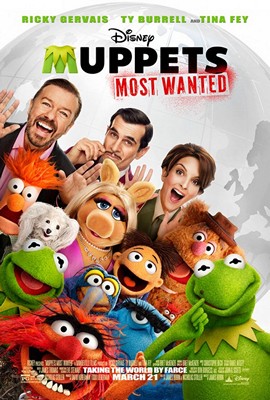 Taking the world by farce.
We're doing a sequel
That's what we do in Hollywood
And everybody knows
That the sequel's never quite as good...
"We're Doing a Sequel," opening song from Muppets Most Wanted
Advertisement:

Muppets Most Wanted, the follow-up to 2011's The Muppets, follows... well, The Muppets (who else?) as they tour Europe, only to become ensnared in a caper as they encounter Constantine, a crime boss who bears an incredible resemblance to Kermit. The film sees the return of Flight of the Conchords alumni James Bobin and Bret McKenzie, as well as The Muppets co-writer Nicholas Stoller. Jason Segel is completely unaffiliated with this movie. The film stars Ricky Gervais, Tina Fey, and Ty Burrell.

Animal is the only one of the Muppets who immediately recognizes Constantine disguised as Kermit.

Animal is the only one of the Muppets who immediately recognizes Constantine disguised as Kermit.