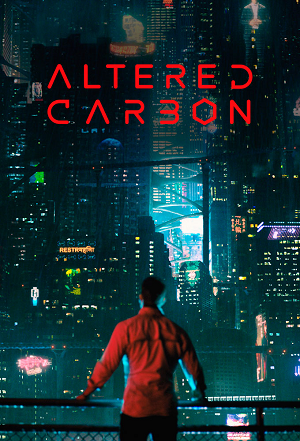 "The danger of living too many times... you forget to fear death."
Advertisement:

The series is set more than 300 years in the future on an Earth where peoples' consciousnesses are stored on cortical stacks implanted at the base of their skulls, so that if someone dies, they can be transplanted into a new body. The first season follows Envoy Takeshi Kovacs after he is brought out of digitized storage (used as punishment for crimes) to work as a private detective for a super-wealthy 'Meth' (from 'Methuselah'), someone rich and powerful enough to afford to live for several lifetimes. The Meth, Laurens Bancroft, has recently returned from the dead (thanks to a personality backup) after an apparent suicide, but maintains that he would never kill himself. Due to the backup schedule, he is missing the 48 hours prior to his death. He hires Kovacs to find out who killed him and why.

The second season follows Kovacs as he returns to his home planet of Harlan's World, initially to act as a bodyguard for a Meth who is being targeted by an unknown assailant. However, no sooner than Kovacs has woken up from resleeving into the body the Meth has provided for him, he discovers that someone has killed his new employer and his bodyguards while he was indisposed. Finding himself the main suspect for the murders and targeted by the government of Harlan's World, led by the corrupt Governor Danica Harlan, and hunted by the ruthless Protectorate officer Colonel Carrera, Kovacs must work to uncover a vast conspiracy on the planet that has embroiled his lost love, the revolutionary leader Quellcrist Falconer.

Due to Adaptation Distillation, beware of some spoilers for the books below.

A feature-length CG anime set before season 1, Altered Carbon: Resleeved, was made available to stream on March 19, 2020.

In April 2020, Netflix canceled Altered Carbon after two seasons, with the streamer publicly confirming it in August.