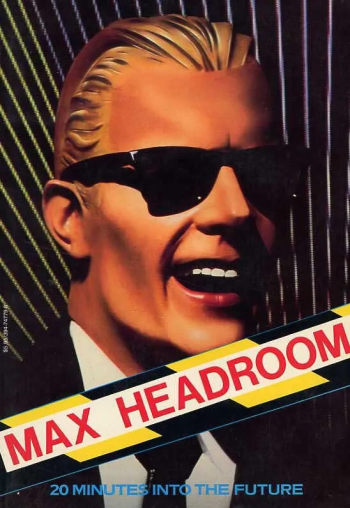 "This is Edison Carter, coming to you very much live and direct on Network 23."
Advertisement:

Back in the 1980s, it looked like computers were going to be able to do just about anything. It also looked like Japanese businessmen were going to economically conquer the world. And it looked like corporate greed was going to grow and grow until the average citizen was a virtual slave to the mega-corporations who would happily destroy the environment, culture, history, and basic human liberty all in the name of profit. Come to think of it, not much has changed and those things look more likely to happen now than back in the 1980s (only with China instead of Japan).

Max Headroom, a plastic-coated stammering faux-CGI host full of sardonic wit played by the frankly underrated Canadian actor Matt Frewer, made his debut in April of 1985 in a British one hour pilot entitled Max Headroom: 20 Minutes into the Future.

Though Max was the star of the show, he was really a very minor character. The story followed Intrepid Reporter Edison Carter (also Frewer) and his "controller" (i.e. director) Theora (Amanda Pays, who later played fanfic-favorite Phoebe Green on The X-Files) as he attempted to uncover a conspiracy revolving around the Blipvert, a highly compressed advertisement his station had recently adopted, which had the unfortunate side effect of causing some viewers to explode. In his daring escape from security with orders to kill, he is gravely injured when he crashes his motorcycle into a gatepost.

Bryce Lynch, a totally unlikable Teen Genius, generates an AI copy of Carter's mind to cover up his disappearance, but the copy is somewhat unstable and has a bad stammer. He takes his name from the last thing Edison had seen before his injury: a sign on the gatepost reading "MAX HEADROOM: 2.3 METERS".

The pilot wasn't picked up, but the rights to the Max Headroom character were sold to the makers of a music-video program on British television, on which Max appeared later in 1985. The Max Headroom show was the first to play with the music-video format, with Max frequently talking over lousy videos and making jokes, or cutting the video off partway through, a technique later picked up by Beavis And Butthead and other satirical video shows. The character was later picked up by Coca-Cola, for a series of TV spots for New Coke and appeared on T-shirts and mer-*BZZZZZZZZZZT*

That does it! He's a freakin nerd! *giggles* Yeah, I think I'm better than Chuck Swirsky! Frickin' liberallllllllll--l-l--ll-l-l...

*BZZZZZZZZZT* Er, we apologize about that

. Moving on. Max Headroom was a huge hit, especially in the UK, to the extent where the show did a crossover with British Instrumental Hip Hop collective Art of Noise in 1986. But it was in the US that the pilot was picked up. Sort of. It was remade by Lorimar in 1987 as the first episode of the Max Headroom TV series, keeping only Frewer, Pays, and Morgan Sheppard (Blank Reg) from the original cast, and substantially rewriting the second half of the movie (but using all the video effects so the money budgeted to effects could be used elsewhere). The Teen Genius was changed from a villain to an unwitting patsy, and Max's role was greatly increased; in the original, Max and Edison never met, and Max spent the rest of the movie as a VJ for a pirate TV station. In the series, he and Edison became partners, breaking the Blipvert story together.

Max Headroom straddled the line between Black Comedy and (mostly) serious Cyberpunk for two half-seasons before being cancelled and largely forgotten. Many believe the network intentionally killed it, scheduling it opposite two hugely popular shows, Dallas and Miami Vice (where, ironically, Matt Frewer played a villain in a two-parter shortly after his show was cancelled).

The world presented by the show was strange and unwieldy, full of corporate greed, corrupt politics (elections to all political offices were decided by TV ratings: each network backed a candidate, and the highest rated network at the close of polling got their man installed), and a legal system that could not possibly have worked (it was illegal to turn a television off, books were banned in order to disenfranchise those who couldn't afford pay-per-view educational TV, bloodsports were mainstream, and trials for all but the rich and powerful were carried out in game show format). Also, everything had silly sci-fi names: "Blipverts", "Baby Grobags", "Credit Tubes", "Neurostim", etc.

The character was resurrected in 2008 as part of Channel Four's marketing for the digital switchover, in a number of (full-length) adverts

. In 2010, it was announced that the US series would be getting a DVD release in August of that year, with an amusing lenticular cover.

The DVD set includes a bonus disc with behind-the-scenes featurettes.

Episode recaps can be seen here.

For parodies of and homages to Max Headroom, see Mock Headroom.

Max Headroom is the Trope Namer for: