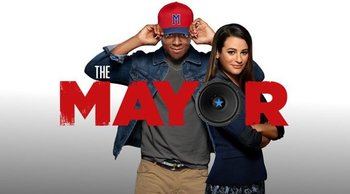 The Mayor is a comedy that premiered on ABC in 2017. It stars Brandon Micheal Hall, Lea Michele, and Yvette Nicole Brown.

Courtney Rose (Hall) is an aspiring rapper in Fort Grey, California, who launches a joke campaign to for Mayor in the hopes that it will drum up some interest in his music. But, a surprisingly strong showing during the election debate sparks genuine interest from the citizens of Fort Grey and Courtney suddenly finds himself winning the election and having to step up and take responsibility for his hometown. With the help of the Val Barella (Michele), his chipper Chief of Staff, the support of Dina (Brown), his mother, and the questionable contributions of Jermaine and TK, his two best friends, Courtney starts to learn how to work within and around the system to try and bring good changes to those who put their trust in him.

Despite decent ratings and good reception, the show was cancelled following its first season.