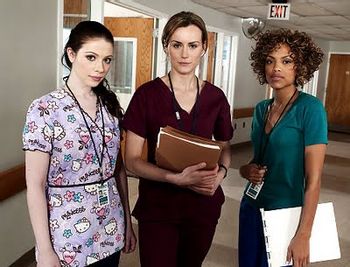 Mercy was a Medical Drama that ran on NBC during the 2009-10 season.

A hospital drama based on the stories of dysfunctional but fun to watch staff. The gimmick of this particular version is that the three primary characters are nurses instead of doctors. It is also timely because the lead is an Iraqi war vet suffering from various levels of PTSD. There are regulars who are doctors too, of course, as well as family and love interests.