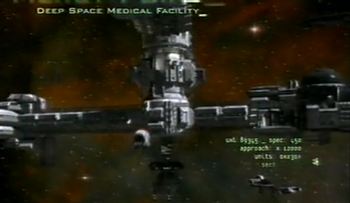 While it could legitimately be described as "ER IN SPACE!"—the visual style, with heavy use of SteadiCams and fast-paced Walk and Talk sequences, is a direct imitation—the show was more than that. It featured intriguing characters in a setting that felt like a small part of a larger, well-developed fictional universe.

You can watch the opening credits here

, and the first few minutes of the pilot episode ("New Arrivals") here