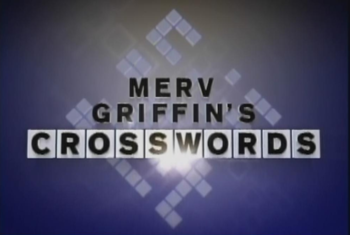 Merv Griffin's Crosswords was a Game Show created by that guy who created such hits as Monopoly, which involved host Ty Treadway trying to be interesting while asking two contestants to solve crossword clues on the buzzer. The words were worth various amounts depending on their length (in Round 1, $50 for a 3-letter word, $100 for 4-6 letters, and $150 for 7+ letters).

To make the simple-looking game more confusing, a musical-chairs mechanic involving three "Spoiler" contestants was used for Rounds 2 and 3. The Spoilers could steal questions missed by the two main players and literally switch places with them if successful, cash and all.

Unfortunately, Crosswords didn't live up to the high hopes of Merv Griffin (whose original pilot involved three contestants building a cash jackpot that the day's winner would play for at the end) or his syndicated crown jewels Jeopardy! and Wheel of Fortune, and wound up being canned after one season. The show continually aired Out of Order due to poor ratings in syndication, and its screwed-up gameplay format and what many felt a lack of charisma in Ty's performance also contributed to its very short run. For better or worse, Merv was unable to see the aftermath of it all, as he died just five weeks before its debut.