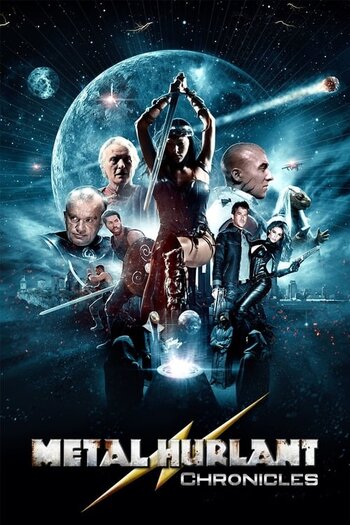 The last fragment of a once-living planet. Its body blasted into dust by the madness of its own inhabitants. While its head was cursed to roam aimlessly through time and space, screaming in pain and sorrow. In legend and in fact, it is known as Metal Hurlant.
Advertisement:

Across the reaches of space, a shard of a once-living planet sails through the stars. It is known as Metal Hurlant ("Screaming Metal"). This mysterious piece of debris wanders across the galaxy, frequently passing by random planets in its endless travels.

These random planets are where our stories take place. From a bloody contest to succeed the corrupt king, to protecting the last hope for humanity, Metal Hurlant is the constant piece in them all.

Made its stateside debut on Syfy in April of 2014.