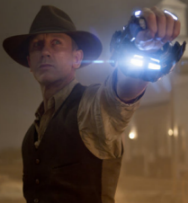 "Hm. This thing I wear on my wrist says they're not poisonous."
— Leela, Futurama
Advertisement:

Items on your wrist are easy to access, versatile, and just look awesome.

Can function as any number of useful tools, like a communicator, a firearm, a light, a scanner, a music player, a smart watch, a portable computer, etc. Typically, this will appear in sci-fi shows as a device from which characters can access a wide variety of tools. Also, unlike a hand-held device, being wrist-mounted makes it "Hands Free", meaning it won't get lost, dropped or hinder the user by limiting the number of hands they might need in a given situation. Truly a remarkable device.

These gadgets in portable computer form are widespread on videogames, because they function pretty well as an immersive Diegetic Interface for the pause menu.