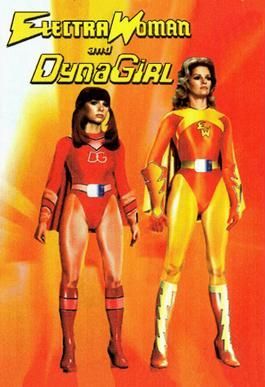 The only show from Sid & Marty Krofft Productions with two female leads, Electra Woman and Dyna Girl features two magazine reporters who are secretly superheroines. It was part of The Krofft Supershow on ABC in 1976/77. A fairly open ripoff and/or parody of Batman, the series consisted of eight stories, each divided into two 15-minute segments.

Deidre Hall and Judy Strangis play Lori and Judy, who work as writers for Newsmaker magazine, but when trouble calls, they become Electra Woman and Dyna Girl! Electra Woman and Dyna Girl use the latest in technological gadgetry, such as the CrimeScope supercomputer and their wrist-mounted ElectraComps (supplied by their resident tech-wizard Frank, played by Norman Alden), along with their bravery and wits, to solve crimes and capture the various villains they encounter, including the Sorcerer, Glitter Rock, Ali Baba, Spider Lady, the Pharaoh, and the Empress of Evil.

In 2001, The WB tried to revive Electra Woman and Dyna Girl. The show wasn't picked up, but a pilot exists with Markie Post as Electra Woman. This show takes place several years after the original and features an older, world-weary Electra Woman who's retired from the hero business after Dyna Girl ran off with her husband, but is called back on the scene by a young and idealistic fangirl who becomes the new Dyna Girl.

In 2016, a reboot happened in the form of a webseries (later released as a DVD movie), starring YouTube comediennes Grace Helbig and Hannah Hart in the titular roles. This series ditches almost everything about the original show and instead presents an Affectionate Parody of modern superhero movies. Here, Electra Woman and Dyna Girl as struggling smalltown superheroines In a World… where, after an event called "The Shadow War", there are no more supervillains and superheroes are little more than glorified celebrities.

The 2001 pilot provides examples of:

The 2016 reboot provides examples of: