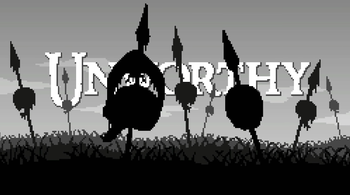 The menu screen, setting up the atmosphere.
The human soul. A sponge that soaks up our sins. Until it simply rots away.
Arc Words in the game's trailer.
Advertisement:

It is set in a Deliberately Monochrome world where all but a few inhabitants have been consumed by their Sin, after the Church that was meant to transfer people's Sins to their God of Filth, Ur, instead opted to try and control the Sin to strengthen themselves. The Protagonist is a nameless "Lamb", who died in the game's opening yet was reborn from sin at what appears to be the behest of Ur, with the goal of ringing the bell that was once in the Cathedral of Ur, but was broken by Altus, the First Father, preventing sins from leaving the earthly world to Ur, and causing them to accumulate and corrupt it instead.

It is currently available

on Steam. The Nintendo Switch version was also released on January 29th, 2019.