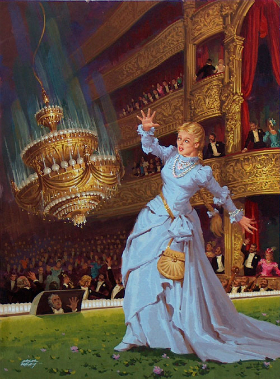 For some reason Agnes's practical eye was drawn to the huge chandelier that hung over the auditorium like a fantastic sea monster. Its thick rope disappeared into the darkness near the ceiling....
"That looks like an accident waiting to happen if ever I saw one," she mumbled.
— Maskerade
Advertisement:

When in high-class surroundings, the standard way to create chaos or kill people is inevitably to drop the enormous chandelier hanging from the ceiling. This is usually intentional on the part of the character, but occasionally it happens by accident. A frequent comedic version is for the hero to accidentally drop the chandelier on his own allies.

This is most common in film and theater since it creates a visually spectacular effect. While there are a few instances of chandeliers unexpectedly falling during performances, this happens far more often in fiction than in real life. Most chandeliers are actually very very difficult to drop. However, building a prop chandelier rigged to drop is childishly easy.

Generally, it's a subtrope of Death by Looking Up. It might overlap with Impaled with Extreme Prejudice. Compare Chandelier Swing. In a few older movies, results in Out of the Inferno because chandeliers used to feature actual candles.

The bouncer of That Hot New Nightclub Downtown wanders into Tilly and Andromeda's trap.

The bouncer of That Hot New Nightclub Downtown wanders into Tilly and Andromeda's trap.