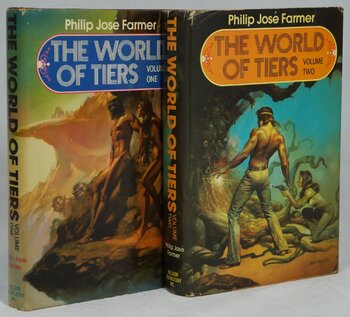 World of Tiers is a series of Science Fiction novels by Philip José Farmer who sends his protagonist into a multiverse of artificially constructed worlds revealing our world is not what it seems.
Advertisement:

An old man named Robert Wolff, looking at buying a house, hears a horn coming from an empty closet he had just inspected. He opens it and finds a portal to another world. A man inside throws him a strange horn before the portal closes. The old man hides the horn, then sneaks back in at night to get it. He opens up the portal and ends up in a bizarre place - a flat world with five tiers, stacked like a step pyramid, with mountainous cliffs connecting them.

He finds out that this world was created by one of the Lords (Thoans), a group of beings with fantastic technologies that keep them immortal. The lowest tier is populated by Greek-descended humans and monsters; Wolff falls in love with a nymph named Chryseis. When she is abducted by the Lord of this world, he must climb up to the top to rescue her.

And that's just the first book. Later books take on the Lords' worst enemy, the Black Bellers, and travel to multiple other universes created by other Lords.

There are six books in the series, plus one related book:

Alternative Title(s): The World Of Tiers