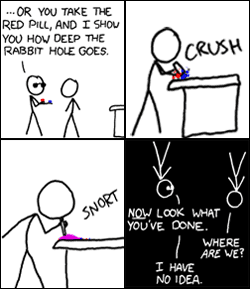 When Neo decides to Take a Third Option...
"You take the blue pill, the story ends, you wake up in your bed and believe whatever you want to believe. You take the red pill, you stay in Wonderland, and I show you how deep the rabbit hole goes."
— Morpheus, The Matrix
Advertisement:

In many series, the hero's heroics are going to change his world. Perhaps he's making things his problem. Maybe he's learning the truth behind the Masquerade, maybe he's traveling to Another Dimension, or maybe the hero lives in a Lotus-Eater Machine and he's going to leave.

In these series, the Call to Adventure is often phrased in the form of a question. Would you like to:

(A) Go out on wacky adventures, fight magic extradimensional alien monsters, and save the universe? (Or, in other words, face mind-numbing danger, allies as crazy as your enemies and Everything Trying to Kill You?)
-or-
(B) Pretend none of this ever happened and go back to your normal life? (Or, return to the mundane grind, potentially unable to find it exciting anymore or forever to wonder what might have been, or just watch the world go to hell while being powerless as a mere normal guy?)
Advertisement:

Red Pill, Blue Pill applies when the hero is offered this choice, and could plausibly have chosen B. The Blue Pill is the promise of being able to resume normal life, with none of the elements of the "new" world intruding upon the old ever again. Often, it even includes Laser-Guided Amnesia so you don't even have to remember that it could have been different.

Of course, the viewers know the character is going to take the Red Pill; otherwise there would be no story. But just the simple act of giving them a chance to choose a normal life lets the writer tell you something about the character: they're the sort of person who does this willingly when they reasonably could say no. In Long-Runners, expect at least one episode where we see what would have happened.

What it says about the character depends on the context. Sometimes it just means he's curious. Sometimes the character Jumped at the Call, despite not knowing it was possible. Other times, it's the ultimate expression of how much he hates the world he knows, and welcomes any change.

Sometimes a villain offers this choice, in the form of taking a quick break from threatening some third party to say something along the lines of "This doesn't concern you. If you leave now, I'll let you go." In this case, it typically indicates selflessness. The villain can also give the hero one last chance to go back to her old, boring life (especially if it turns out that saving the world involves a Heroic Sacrifice). You know the hero is really dedicated if she chooses to continue fighting anyway.

Note that the Blue Pill only has to look like a viable option. In many cases, if the hero had chosen the Blue Pill, the world probably would have ended because The Chosen One didn't show. The villain mentioned above may be planning to shoot the hero the minute he turns to leave. More subtly, if the hero does take the Blue Pill, this is technically Refusal of the Call, and just because the Call asked nicely doesn't mean it doesn't still know where you live.

In video games, this is usually a But Thou Must! or a chance for a Non Standard Game Over.

If this choice is offered at the end of the adventure, it's the hero's "Leave Your Quest" Test, and choosing the hero's path anyway is proof the character is a true hero. The villain prefers to "offer" the hero The Final Temptation instead.

This trope may also be used in conjunction with Betty and Veronica, where the Hero's choice is embodied as possible romantic partners: An Action Girl who fights by his side as the Red Pill, and the sweet Girl Next Door who offers the opportunity to settle for a normal life as the Blue. In this case, it's not a single choice, but a constant temptation complicated by the pull(s) on the Hero's heart. Following from the above, however, the dynamics are different if this choice is made at the end of a work: In this case, the choice is the difference between In Harm's Way and Home Sweet Home. Subtrope of Two Roads Before You.

Unrelated to Red Oni, Blue Oni. Also not to be confused with the documentary The Red Pill, though the title is derived from this trope's concept.

[Trope Namer] Morpheus offers Neo the choice of either returning to his mundane illusory life by taking the blue pill, or uncovering the truth behind the Matrix by taking the red pill. Neo immediately goes for the latter option.

Alternative Title(s): Question Of The Call

[Trope Namer] Morpheus offers Neo the choice of either returning to his mundane illusory life by taking the blue pill, or uncovering the truth behind the Matrix by taking the red pill. Neo immediately goes for the latter option.