"I know you're afraid. I know the world feels like a hard place, sometimes. But you've got people who love you. Your dad and I, we have all the faith in the world in you. We'll always be with you. You have got a world of strength in your heart. I know you do. You just have to find it again. Believe in yourself."
—Joyce Summers 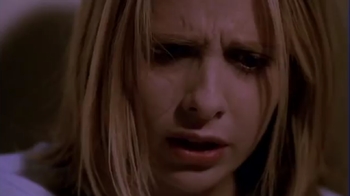 "For the last six years, she's been in an undifferentiated type of schizophrenia."
Advertisement:

Buffy searches newly rented houses for the Trio's hideout. The three discover her on surveillance equipment but she gets too close. While they hide in the basement, Andrew calls on a demon which attacks Buffy and starts a fight. The demon grabs Buffy and stabs her with a needle-like part of its body.

In a mental hospital, Buffy cries out as she's held by two orderlies and stabbed with a needle. Outside the Trio's house, Buffy wakes up confused and alone and walks home.

Willow prepares to talk to Tara but sees her give her female friend a quick kiss; Willow leaves, wounded. Tara notices her leave but it's too late to catch her. At the Doublemeat Palace, Buffy works like a zombie whilst having brief flashes to the hospital where the doctor tells her it's time for the drugs. Willow and Buffy talk about Xander's disappearing act and Willow's attempt to talk to Tara. Xander surprises the girls by showing up at the house. He wonders about Anya and how to rebuild his relationship with her. The girls tell him that Anya left town a few days ago and that everything will be fine in time.

Buffy runs into Spike at the cemetery and they talk about the events at the wedding that didn't happen. A confrontation begins between Spike and Xander and as Willow tries to break it up, Buffy becomes weak and collapses. Xander manages a one punch to Spike who focuses on Buffy. At the mental hospital, a doctor tells Buffy that she's been hallucincating for the past six years and everything she knows about Sunnydale is fake. She's shaken and confused, especially when both of her parents walk in before Buffy falls back into Sunnydale world.

Willow and Xander get Buffy home and she tells them about the mental hospital and what the doctor said. While Willow organises a plan to research, Buffy returns to the hospital where the doctor explains to her parents that she's been catatonic from schizophernia for the past six years and her life as a Slayer has been elaborately created.