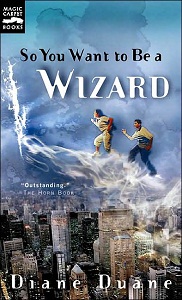 An ongoing series of novels by Diane Duane (the first of which was published in 1983), set in a fictional analogue of the modern world where wizards are champions of "The Powers That Be" and given the ability to rewrite the universe using the Speech — essentially reprogramming the universe and thus performing wizardry. Wizards can literally be anything (animals, robots, etc.) and can talk to anything. No, seriously, anything.

Their main duty is to travel through time and space to battle the Lone Power, the evil Power who created Entropy and Death, usually involving them heroically sacrificing their lives. (In fact, halfway through the first novel it is explicitly stated that someone usually has to die this way in order to defeat the Lone Power — although it doesn't have to be a wizard.)

Notable because magic is presented as an advanced scientific principle, rather similar to the way Fullmetal Alchemist presents its alchemy. The series also includes lots of extraterrestrials, trips to other planets and moons, and a tendency to explain all mythology as being representative or descriptive of the actions of wizards and the Powers and all language as having been evolved from a natural innate ability to "speak" the Speech. This has the effect of making the YW series feel a lot more like a hybrid of semi-hard Science Fiction and mystic fantasy than it does pure action-adventure fantasy.

Those who will,
The Powers lead;
and Those who won't
They drag.

The first nine books were rereleased as New Millennium editions

from 2012–2019, creating a more cohesive timeline among other changes.

In the years-long gap between the publication A Wizard of Mars and Games Wizards Play, three shorter pieces were written and published digitally though Duane's own website, collected in 2015 for both digital and online-only print-on-demand in the volume Interim Erranty. They form a holiday trilogy being set around Halloween, Christmas and Valentine's Day respectively. They include:

A second novella collection, Interim Errantry 2: On Ordeal, released in 2017. Each story in the collection focuses on a different wizard and their first trial against the Lone Power.

Miscellaneous short stories set in the universe include:

There's also a sister series, Feline Wizards, which takes place in the same universe, but concerns a team of cat wizards who maintain the worldgate wizardry for New York City.

Alternative Title(s): So You Want To Be A Wizard